Customer-First Marketing: How The Global Leadership Summit grew attendance by 16% to 400,000

If you've had your fill of marketing theories, and you want tangible examples of successful marketing practices in real-world circumstances, then this webinar is for you.

John Jordan, Executive Director of Digital Marketing for The Global Leadership Summit (GLS), and 30 of his colleagues conducted a custom, on-site value proposition workshop with a MECLABS facilitator to improve marketing performance for the largest leadership event in the world.

After applying the new value proposition, in addition to principles learned from MECLABS methodology, attendance for the GLS grew to 400,000, and revenue attributed to email testing increased 82%. These results motivated the organization to no longer rely on best practices or "The Golden Gut," but instead, to become a testing culture that builds a robust customer theory.

Daniel Burstein, Senior Director of Content for MECLABS, hosts this session and acted as guide through the MECLABS Conversion Heuristic.

Get the Takeaways: Read, Watch or Listen

Get the annotated transcription, key details and takeaways are highlighted for easy reading.

Get the audio file for on-the-go learning on your mobile device.

We want to better understand a customer so that we can better serve a customer. 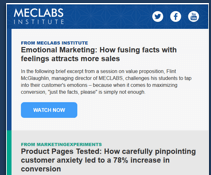