The selection process for MarketingSherpa Email Awards 2015 included 30 hours of pre-screening, followed by 20 hours of deliberation with five judges of varied email marketing backgrounds and perspectives.

Out of 500 speaking submissions and email case studies, the panel selected two Best-in-Show selections for B2B and B2C as well as five finalists for the MarketingSherpa Award — Readers' Choice Email Campaign from which Microsoft Store was chosen by MarketingSherpa blog readers in a 10-day voting period.

All of the following campaigns exemplified the five key standards for this year’s judging process: transferable principles, strong results, customer-centricity, transformation and innovation. There were many great campaigns submitted, but these five selections excelled in each area. 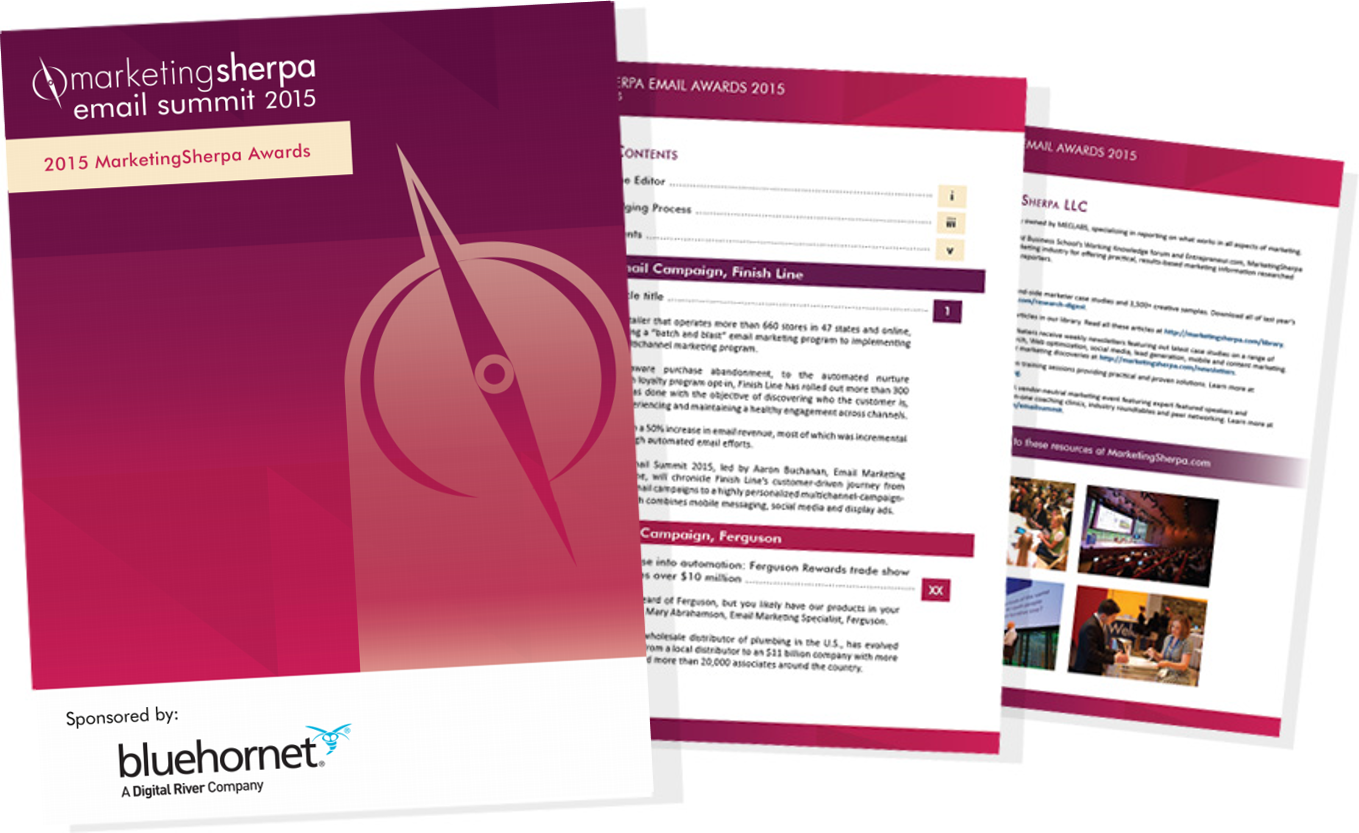 From causality-aware purchase abandonment, to the automated nurture of visitors through loyalty program opt-in, Finish Line has rolled out more than 300 segments. This was done with the objective of discovering who the customer is, what they are experiencing and maintaining a healthy engagement across channels.

The result has been a 50% increase in email revenue, most of which was incremental being driven through automated email efforts.

"You may not have heard of Ferguson, but you likely have our products in your home and office," said Mary Abrahamson, Email Marketing Specialist, Ferguson.

Ferguson, the largest wholesale distributor of plumbing in the U.S., has evolved over the past 60 years from a local distributor to an $11 billion company with more than 1,400 locations and more than 20,000 associates around the country.

The email Ferguson sent out before tradeshow events  had no registration information and provided no chance for the company to follow up. Each send also had to be manually created, essentially leading to the same email being changed and sent more than 90 times.

At the event, attendees had to physically fill out cards the day of the event, and the cards could spend up to three weeks in transit back to Ferguson's headquarters, only to then be manually uploaded to the email database.

The team looked to automate the email process to allow for tailored content based on the customer type and segment.

Having data was key in this effort because, at the time, there was no documentation about event attendance and "all metrics were assumed or hearsay," Abrahamson said.

The team had a goal to digitize the on-site registration process at the Ferguson Rewards trade shows. This new system would eliminate the delay in adding in new email subscribers and the need to decipher illegible handwriting from the cards.

At MarketingSherpa Email Summit 2015, attendees will hear how Ferguson Enterprises generated $10 million in online sales by enriching the customer experience. Mary Abrahamson, Email Marketing Specialist, will take the stage to share the customer journey of two personas as they move through the sales funnel.

This fragmented start led to a legacy of separate and multiple systems that were used to collect data, making it hard to understand customers across both areas. Additionally, because different systems were used, the marketing team collected different points of data from customers depending on where they purchased their products.

Microsoft Store set out to build a long-term data infrastructure that would deliver dynamic, relevant customer communications while simultaneously working within current data confines to begin learning about customers.

Instead of waiting for the perfect data situation, the team made the most out of what they had, and as a result, the marketing team was able to increase email volume by 300% from 2012 to 2014. This increase came with an average 600% lift in email revenue, against promotional sends.

Stay Informed
Get updates about speakers, the agenda, special offers and more.
#SherpaEmail